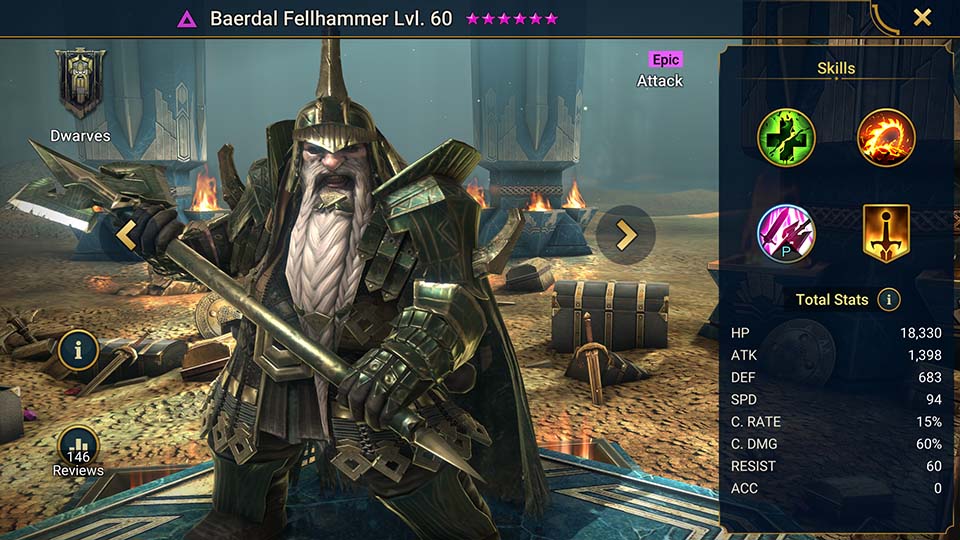 Once upon a time, Baerdal Fellhammer was a brave and boisterous warrior, ever looking for a good scrap to test himself in. Short he may have been, but only a fool underestimates a Dwarf’s strength. And, to Baerdal’s glee, there had been plenty of fools in Teleria’s taverns. So he fought, he drank, gambled away whatever he had earned, and enjoyed his carefree life. All of that would not last. One of Baerdal’s forays into the forgotten crypts ended in catastrophe. The ancient floors collapsed beneath his feet, and the Dwarven warrior had been thrust into catacombs far more ancient than even the tomb he had been exploring. There Baerdal had been forced to fight for his life for days, beset on all sides by skeletal ghouls and malevolent spectres, until he finally found his way out. The desperate battle with no rest or respite had changed Fellhammer, and where a loud and cheerful fighter entered the tomb in search of glory, a paranoid and cautious survivor burst out from its catacombs and into the grim Durham Forest. But all was not in vain. Through sheer grit and the strength of his axe arm, Baerdal slew many unclean creatures, and fought his way to a glade where an eerie light seemed to keep the Undead at bay. Tired and wounded, Baerdal collapsed by a pond of water as black as pure obsidian. He dreamt of spirits that coalesced and danced around him, keeping away the evil that would see him dead. When he woke up, Baerdal Fellhammer realized that the Fey – guardian spirits of Durham – had imparted a small portion of their power upon him. Be it for his bravery or simply because they were compelled to, but their protection has remained with him until now. *This Champion’s story had been adapted from the contest submission by Murd*